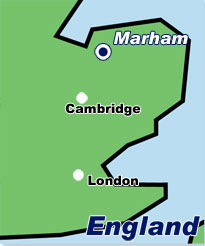 Marham rally stage is at RAF Marham in Norfolk. The entrance is off Chalk Lane from the A1122 Swaffham Road West of the A47 King's Lynn / Swaffham road. RAF Marham operates three squadrons of Tornado fighter aircraft.